Load up and take aim, Slotastic's first ever multiplayer game is one not to miss! Compete against other players online in an underwater battle in the action-packed Fish Catch game. This exciting multiplayer game will take you to the depths of the ocean as you explore four different settings trying to shoot as many fish species as possible to earn the top score.

How many players will you defeat in this thrilling multiplayer game? 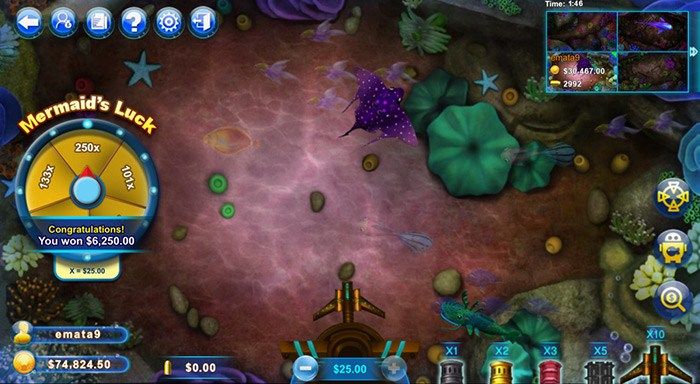 Play up to four players at a time in a new gaming adventure that combines online multi-player fun and casino thrills. To begin the game you'll need to choose the denomination of your bet, this will determine the effect that your ammunition has on certain fish. You can choose between five betting/weapon variants. Weapons with a lower bet value cost less but you'll need to use more ammunition to take down your enemy. Another option is to increase your bet amount to use ammunition with greater damage, this will take out your enemies more effectively, but at a cost.

As you'll be playing online against other players you'll have to adapt your strategy based on your opponents performance and skill.

HOW TO WIN PLAYING FISH CATCH?

Unlike other casino games, the Fish Catch game requires skill and determination to succeed and not random chance. However, Mermaid Luck is on your side in the randomly triggered feature that can pay up to 250 times your bet. Once triggered a wheel of chance will appear on your screen with several winning options, each one offering to multiply your winnings.

Experience Fish Catch today at Slotastic on desktop, mobile, and on the Android App! Happy Shooting!